Fine art in a variety of mediums

Just floating along without a care in the world. 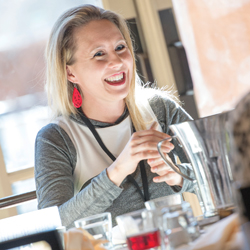 My passion for horses and creating art began in childhood. At around age six, I experienced an event that changed my life. I rode a pony at the Philadelphia Zoo. Those five minutes began a life-long need to know these amazing creatures. Growing up, I spent most of my time drawing, riding or learning about horses. My higher education began with an Associate Degree in Equine Science from Delaware Valley University in Doylestown, Pennsylvania. Since my spare time was spent drawing and creating, I then gained formal art training and pursued a degree in art and design earning a Bachelor Degree in Fine Arts (Communication Design/Illustration) at Kutztown University in Kutztown, Pennsylvania. This began my career as a visual storyteller in design and art.

Painting, drawing and creating fills a personal creative need. It allows me to be looser and hands-on, solving different visual problems of color, value, harmony and layout. It gives me the opportunity to explore different styles and avenues of visual expression. My artistic style is ever-evolving. From abstract figurative work to hand-painted jewelry to realistic pet portraits, my artwork has varied according to my place in life, mood and bandwidth. With a minimal amount of time, one of my recent directions is painting miniature artwork for jewelry and small acrylic pet portraits. This keeps me creating in the small pockets of time I have as my husband and I raise two active boys. Even when there isn’t spare time to spare, painting and creating in different ways keeps me seeing life from a different vantage point. As a life-long animal advocate, you'll see that much of my work is inspired by the beauty, heart and spirit of animals and nature.

For inquiries or to commission a painting, please contact me by email at nancy@nancysoulliard.com or fill out the form below.